THE AKHAL-TEKE – THE ORIENTAL THOROUGHBRED

The Akhal-Teke, also called the Turkoman horse is both the ancestor of the Arab and the English Thoroughbred, though this fact is not very well known within the horse world. From ancient times of Ghengis Khan to the present day, the Akhal-Teke has always been highly appreciated. He was the fastest horse one could find and he can cope with the worst living conditions, reason why he was also very cherished as a war horse. The Chinese even did wars for the “bloodsweating horse” as he was called in those days.
Through wars the Akhal-Teke also migrated from Central Asia to the Arabian peninsula nearly 3000 years ago at a time where no horses where to be found in those areas. With the centuries & with horses that migrated to the Arabic Peninsula as well developed the Arabian horse.
As for the English Thoroughbred, two of the three founders of the English Thoroughbred Byerley Turk as well as the Darley Arabian, were Akhal-Teke.
So there is no doubt, even if this fact is hardly known that the Akhal-Teke is the ancestor of the two thoroughbreds.

Watch them on video 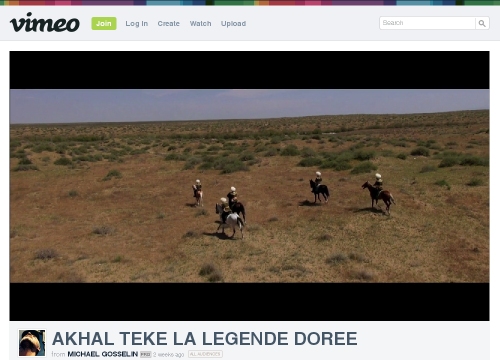 The geographic origin of the Akhal-Teke lies in Central Asia and consists nowadays in countries of the five former Soviet Republics ending with “–stan” so Turkmenistan, Kazakhstan, Uzbekistan, Kirgistan and Tadjikistan. But the centre of this breed clearly is Turkmenistan, even if Akhal-Teke horses are to be found in these other states as well. Turkmenistan, the horse is holy and a national emblem. They even have a “horse ministry”.
The Akhal-Teke used to be called the Turkoman. So where does “Akhal-Teke” come from? In fact this denomination comes from the Soviets,  “AKHAL” is one out of five districts of Turkmenistan and “TEKE” simply is the main tribe that lives in the Akhal region.
Being a thoroughbred this breed has enobled many other breeds through the centuries and this even in Europe. For instance, the Trakehner carries a lot of Turkmen blood. During the 18th Century a few Turkmen horses came to Europe. The most famous one was Turkmain Atti, who came to Neustadt Dosse in Germany. There, he sired over 200 Trakehner mares. The German Olympic jumping horse, METEOR, for example, ridden by Fritz Thiedemann, is a descendant of this Turkmain Atti.
The most dramatic period for the Akhal-Teke was definitely the 20th Century. During this time, the Akhal-Teke almost faced extinction twice. The population fell to lower than 1000 head. In order to alert public interest, some passionate owners in Turkmenistan undertook the enormous marathon ride from Ashgabat back in 1948, the capital of Turkmenistan, to Moscow. 4300 km separate those 2 cities, mountains, the Karakum desert. Conditions were extreme harsh but the convoy reached the capital in only 84 days. Through this exceptional ride, the breed got the much needed publicity that helped preserve the breed from extinction.

Versatility of The Teke Breed

An Akhal-Teke what for, you might ask.
The answer of this question is quite easy, name it and the Teke will satisfy your wishes.

Just like it's cousin, the English Thoroughbred, the Akhal-Teke is an allrounder capable to achieve any duty you'll ask him. Of course, you'll have to make your choice on the personal abilities of your horse. But this breed is, even if the breed has only more or less 4000 head worldwide so versatile that there should be a Teke for all tastes.
They can also be different in type and confirmation, going from the very skinny greyhound look to an almost warmblood,.

The Greyhound Horse : Character And Skills

Akhal-Tekes are extremely thin and graceful. That’s why they are nick-named the "greyhounds" within the horse world. Another special characteristic of this oriental horse is its golden shining coat. All colours do exist except for coloured (paints), they all have this special golden reflection to their coat. Nature has invented this kind of sun protection as it preserves the horses with its reflection qualities against extreme temperatures. To describe the character of the horse, it is absolute honest. A very unique relationship developed between man and horse, if the owner deserves an Akhal-Teke and gets accepted by its horse. This relationship is comparable with the relationship humans have with dogs.

As he is originally a racehorse. We have found Akhal-Tekes in nearly all kind of disciplines. The most famous one is definitely ABSENT, individual olympic gold medallist in dressage in Rome, but also team bronze and silver in Mexico and Tokyo. Absent started 3 times at Olympics, each time with another rider which is a real achievement to have been each time in the medals. Individual gold was with Serguei Filatov.

Others are doing well in jumping, eventing or western disciplines. There exist other famous horses, such as the stallion PRINS, formerly ridden by Ludger Beerbaum or CHAN, officially a Trakehner ridden by Michael Klimke, both have one of their close ancestors being an Akhal-Teke.

From Asman Teke there was Sotschi who did win the Silver medal in the young riders team championship in eventing in Switzerland. Most of our horses compete in endurance, but some are in eventing and even in trec.

In endurance there have been Ganesh, Myr, Sugun, Danagul, Amu Darya who have been in CEI and 1,2 or 3 *, just to name of few of them. More recently Sypaiy is doing well in eventing. Saygak even became European team Champion in Trec in 2013.